Foundation Hotel in downtown Detroit encompasses the former Detroit Fire Department
headquarters, built in 1929. Detroit’s firehouse, a five-story, solid block of a building, was endowed with terrazzo, marble, travertine, oak, leaded glass and ornamental plaster. The voluminous apparatus room with its original glazed-brick walls now serves as a restaurant with a circular centerpiece bar. Some tables are topped with marble reclaimed from the building’s interior. Just off the lobby, an overhead blown-glass installation has replaced suspended fire hoses in the drying tower. And the restaurant kitchen occupies space where firefighters once prepared meals during shift work. The mechanical system upgrades were a challenge as the building was previously heated by the municipal district steam plant. Combination of two condensing boiler arrays provide building heat to the perimeter high temperature systems and to the water source heat pump loop. 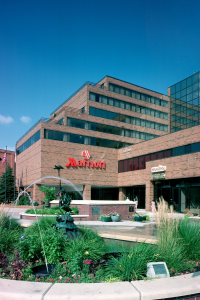 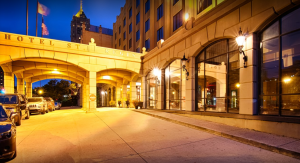